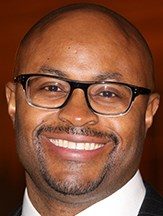 Dr. Ramel “Kweku” Smith, PhD, LP was hired as Senior Psychologist in the Clinical and Sport Psychology Services in September of 2019. In this role he provides individual psychological sessions, team trainings, consulting and educational workshops for staff, coaches and athletes.

R. Kweku is an author of multiple books and is a sought out international speaker. He has been featured as a speaker and/or writer on ESPN, CNN, The Milwaukee Journal, Leaders in Sport, The New York Times and Time.org.

From 2014-2016, he served as the Team Psychologist for the Milwaukee Bucks. He served on the Clinical Advisory team for the National Football League and worked with multiple NFL teams from 2016-2019. In addition, he has worked Nike’s EYBL and served as a consultant for The Sports & Entertainment Group.